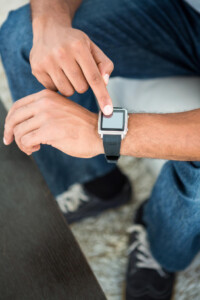 Smartwatches have become extremely popular since Apple released the Apple Watch in April 2015, but the target audience for smartwatches is vastly different than that of, say, a luxury Rolex watch.

In an article from A Blog to Watch, Ariel Adams explains, “The resistance to leaving behind a serious investment and hobby is too great in comparison to the still-limited benefits of ditching your mechanical watch in favor of a connected electronic one.”

In other words, horological enthusiasts are not going to value smartwatches the same way they value their luxury watches. Another article explains:

Luxury watches, particularly Swiss-made watches, have been highly valued and highly sought after since the 16th century, but since the age of cell phones and computers, people generally don’t need them for telling time. Instead, they’ve become more of an investment and statement piece.

Continue reading about the battle between luxury watches and smartwatches.